Shout Out for Regatta Pictures

Its the 175th Anniversary of the 1st Regatta at Sturgeon Point.  We would love to include your pictures in the display.  Please get them to SPA or myself ASAP to include them.

We need fun ones... serious races... on land... on the water...  running... canoeing...  We want your pictures!
1999 Running Races program... looks familiar... Who remembers what the Novelty Race was?
Posted by The Sturgeon Point History Project at 17:26 No comments:

Grab some SLSC experience in the Far North!

There are expatriate-Sturgeon Pointers living right across this fine country and interestingly there are a large number of them in Whitehorse, YT.  Perhaps its the woods... the water... or perhaps its just never having to do the Sunday evening drive to Toronto again...


So this is a note to those Sturgeon Pointers enjoying life in the Far North.  The BC Sailing Association is running its Mobile Optimist Sailing School in Whitehorse again this summer for two weeks - July 1-5 and July 8-12.  Former SLSC instructors Samuel Benson and Sam Nyhuss are teaching the program again this year.

So while you may not be heading south to The Point this summer, here is a chance to share some SLSC magic with your kids.
For more information, please contact the BC Sailing Association at www.bcsailing.bc.ca for on-line registration and e-mail Isabelle Gagnon at marcisamael@hotmail.com
We wish Samuel and Sam all the best for a great summer of teaching and travelling.
Posted by The Sturgeon Point History Project at 08:15 No comments:

It is with sadness that I report the passing of John "Doc" Savage. He was a tour de force, with and amazing capacity for life, that had been slowly silenced by Alzheimer's.


John's grandparents Col. Alexander Copper and  Agnes Massie had come to Sturgeon Point in 1918 renting what is now the Phipps cottage from Lillian Grieg Stewart.  There they raised their three children, including John's mother Marjory.  About 1926, they bought the cottage at the bottom of 2nd Street from their friends William Rundell & Ada Dundas.  In turn Marjory Cooper and her husband, Reginald Savage, raised John and his sister Joan at The Point.


He led by example.  His commitment to the community in which he had been a year round resident from the 1970s was done through public service.  As Reeve he fought long and hard for our village in the face of a Province determined to amalgamate.  He spent endless hours ensuring that our voice was heard and that we were represented on the wider stage.
John was "out" at a point in time when many were still fearful of community reaction.  He paved a road of tolerance for younger generations. 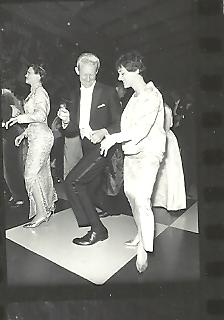 As a young man...﻿
﻿
We wish for John now the dignity and peace that Alzheimer's had stripped from him and we thank his friends for ensuring that his final years were safe and secure.
A Celebration of his life will be held at St. James Anglican Church in Fenelon Falls on Thursday May 23rd at 7:00pm.

His obituary appeared as follows:

In his 87th year, passed peacefully in his sleep at Wellesley Central Place in Toronto, on Friday, May 17, 2013.

Doc had a full life. He was raised in a loving family in Toronto, where he worked as an advertising executive.

Doc had the opportunity to travel the globe extensively before retiring to the gentle shores of Sturgeon Point. Doc served this tight knit community that meant so much to him for years as it’s Reeve, a job that was very endearing to him.

Doc was very fond of the arts, and was an avid supporter of The Canadian Opera Company and The National Ballet of Canada.

Doc knew what it was to give back to the community that he lived in, and volunteered on countless community projects, to name a few... Case Manor in Bobcaygeon, Ross Memorial Hospital in Lindsay, The Peterborough AIDS Resource, and The Victoria and Northumberland County.

Doc was a gracious host, and valued friend and will be sadly missed by all who knew him. He has joined his closest friends, Joe Rivard and Brent Savoy who have passed a few years ago.

A Celebration of Doc's Life will be held at St. James Anglican Church, 19 Bond Street, Fenelon Falls on Thursday evening, May 23rd at 7:00 p.m. A reception will follow in the adjoining church hall.

If desired, memorial donations to the Ross Memorial Hospital Foundation or the St. James Anglican Church would be much appreciated.
Posted by The Sturgeon Point History Project at 09:15 No comments:

Other Spots of Interest